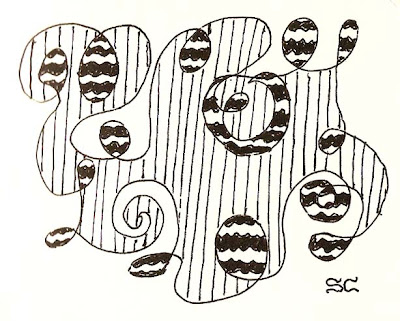 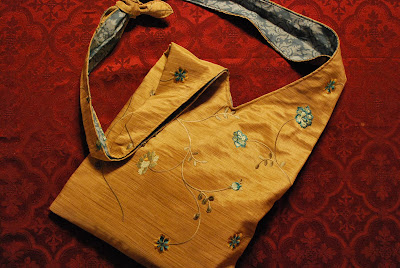 I've been working on this bag since
November; I had most of it cut out
and ready to go, but just in the past
few days managed to sit myself down
and sew it up. It's made out of upholstery fabric and has little tufty
fuzzies for some of the leaves. I love
the texture and sheen.
Now to see how it holds up to my
rigorous testing for bag effectiveness:
does it hang well? Are the pockets deep enough? Are there enough of them? Is it too easy to overstuff? Etc.

Only time will tell.
4 comments: 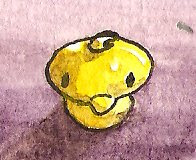 ...And this is my 7-year-old
daughter's current favorite.
It's about a centimeter high,
in keeping with her love for
the teeny tiniest of things.
Its (her -- all toys are
decidedly female, regardless
of appearance) name is Ducky.
No comments: 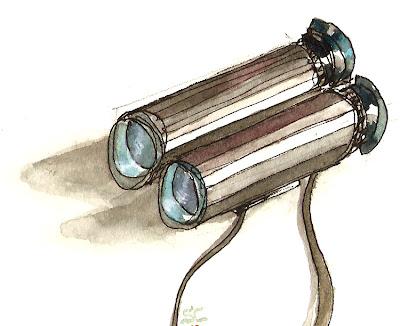 I always enjoy seeing which toys my children will get attached to along the way. These plastic binoculars are the e-boy's latest favorites (pronounced "bee-noculars"). My housemate Julie picked them up for him at the grocery store last week. It seems she has an innate ability to determine what will appeal to 3-year-olds.
No comments: 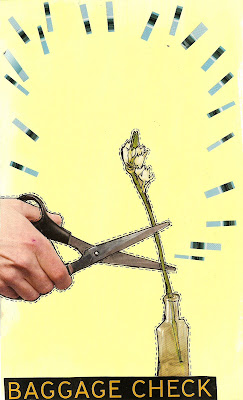 This is another 'before'. I have no idea what the 'after'
will look like. Stay tuned.
On another note, I've been learning a thing or two lately
about receiving good things from other people.
No, not really.
I should say I've been given uncomfortable opportunities to
receive good things from other people. Today, my husband
took care of our little boy all morning and sent me out for coffee.
I went: good thing received.
Then, unexpectedly, the barista at my fave-o coffee shop gave me
a free latte. The funny thing is, she didn't tell me she was giving it to me.
We were just having a happy little chat, and then when it came time to pay,
she said she was going to do something different with my charge and
that she would come find me later. After which she walked by me
several times and proceeded to ignore me and avoid eye contact until I left.
I finally figured out that she wasn't going to charge me & probably
just didn't want to announce it in front of other customers. Ignoring her back,
then, seemed like the polite way to accept her gift. But I took a tip up
to the jar and tried to say thank you on my way out, at which point
she suddenly became busy, so it didn't happen.
Later in the day, I realized that I wasn't supposed to say thank you.
Not that it's wrong to be grateful. Just that it was my little effort to
pay back a gift. I think God wanted me to not be able to give
anything back at that moment. I mean, the reason I have a hard time
receiving good things is that I may not be able to reimburse later
with a grateful response or some kind of adequate reciprocation.
How 'bout you? How are you at receiving kindnesses?
3 comments: 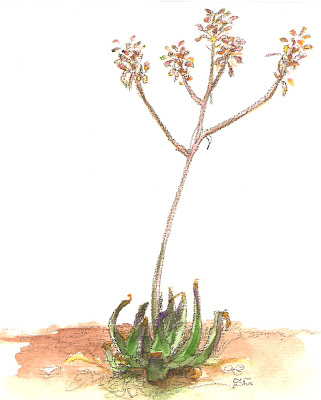 The desert is in bloom!
No comments: 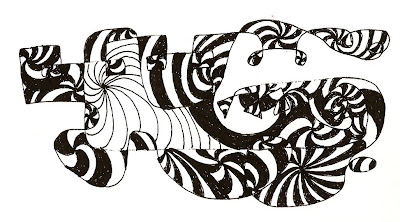 And a happy Monday to you all! 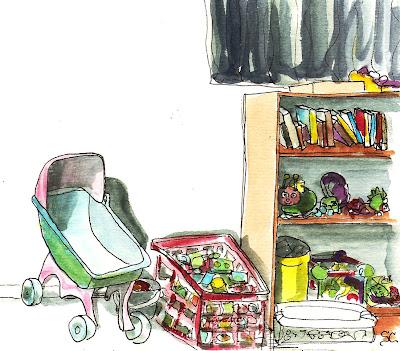 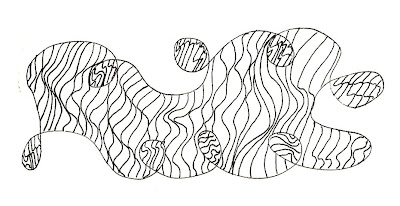 So, in case you've been wondering, I got this idea to doodle
enclosed shapes and then fill them in with various designs
(he calls them algorithms) from a book called Keys To Drawing
With Imagination by Bert Dodson. He encourages a lot of
doodling, decoration, and development of doodles into
other things as part of the creative process. Fun stuff!
No comments: 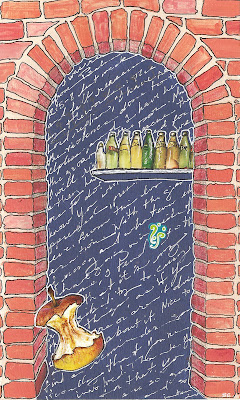 Here's the finished page! The scrawly writing is
intentionally illegible, but it's a medititation on Psalm
12:5-8, which reads (NLT) "The Lord replies, 'I have seen
violence done to the helpless, and have heard the groans of
the poor. Now I will rise up to rescue them, as they have
longed for me to do.' The Lord's promises are pure, like
silver refined in a furnace, purified seven times over.
Therefore, Lord, we know You will protect the oppressed,
preserving them forever from this lying generation, even
though the wicked strut about, and evil is praised throughout
the land." This stood out to me because I forget sometimes
that God is concerned about protecting people who are
suffering. So I overhear stories of suffering and get weighed
down by them -- there's often not much I can do to address
them. It's good to be reminded that God is also aware
and is actively involved. Which I've certainly seen evidence of.
3 comments: 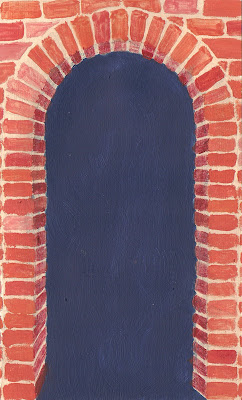 I recently discovered the amazing premier issue
of Art Journaling magazine, put out by Somerset Studio.
It was worth every penny of the (gasp) $14.99 (plus tax)
I spent on it, as it is chock full of images, is printed on heavy
paper (not the standard flimsy magazine page), and also
gets down to the nitty gritty on technique and supplies.
So there you have it. I am feeling inspired to take my
visually-charged journaling on some adventures. Today's
image is a work in progress. It's the background painting
of a page-to-be. I post this because a)I like the way it turned
out, b)I think it's fun to see things in different stages
of their creation, and c)it may likely get to looking worse
instead of better, in which case I'll be able to look back and
remember that I don't always like every brick outlined in
black (see tomorrow's post) and maybe learn from my mistakes.
Or vice versa.
No comments:

someday it will all go in the toilet 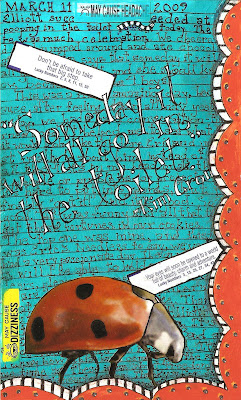 thoughts on the drive

I've been thinking lately about the creative process. I feel this crazy drive to create things, and I've lived with it ever since I can remember. If you read books by artists, they talk about this drive as some burden that only artist's bear, which I find to be incredibly snooty. I think we all have the drive, and it just get aimed in various directions. Some of us point it at art, some of us at food, some at relationships or specific people, some at sex or drugs or rock 'n' roll. Ultimately, I think it's the consequence of having been created in the image of God, which is perhaps more than we can bear now that sin has introduced depravity into the mix of all that glory. We are left with a gnawing emptiness to address. I think that true religion invites us into worshiping God in the midst of this emptiness; it doesn't eradicate (although it may sometimes alleviate) the thirst.
Rather, it gives hope for a future where all these things will find a fruitful resolve while maybe helping us into a present where we can love other people in a way that points to this good future.

In the meantime, I keep drawing and painting. I hope I can do so in a way that's not oppressive to the people around me, especially my husband and kids. And it would be nice if it was also mystically helpful to the journey of the people around me, by illustrating their true identities or their experiences or the Truth or something. But it always feels like a strange and difficult tension.

What do you think about all this? What has been your experience of it?
4 comments: 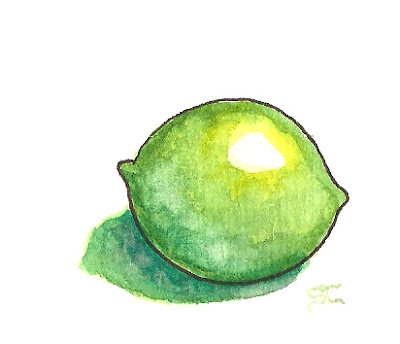 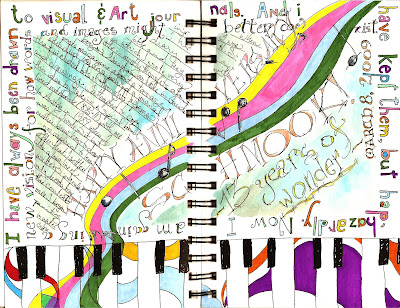 Hey, you lovely people! I'm off to celebrate, so I'll see you all next week!
No comments:

The mulberry trees are pollinating right now. They're
such atrocious allergens that it's illegal to plant them
in Arizona. And we have one in our back yard. Ah choo!
No comments: 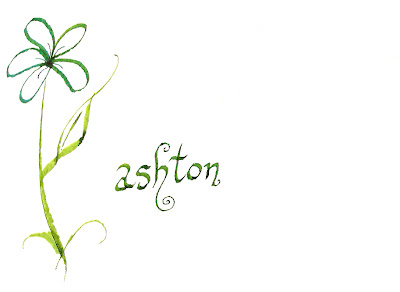 Pilot makes these wonderful calligraphy pens called
parallel pens. They're completely portable, durable,
and refillable. This little sketch was done by filling
two of these pens with different colors of Dr. Marten's
Hydrus watercolors and charging one color into the other.
No comments:

Welcome to my blog. I'm glad you stopped by!

Friends and Other Fun

How To Make A Cape

How To Make Index Tabs